A few months ago, I blogged about how you can use Tableau parameters when connecting to many database datasources in order to exert the same sort of flexibility that SQL coders can build into their queries using SQL variables.

This was necessary because Tableau does not let you use SQL variables, common table expressions, temp table creation or other such fanciness when defining the data you wish to analyse, even via custom SQL. You can copy and paste a SQL query using those features that works fine in Microsoft’s SQL Server Management Studio or Oracle’s SQL Developer into Tableau’s custom SQL datasource box, and you’ll get nothing but errors.

But it turns out that there are actually ways to use these features in Tableau, as long as you only need to run them once per session – upon connection to the database.

Why do this? Well, if you have a well-designed data warehouse or other analytically-friendly datasource hopefully you’ll never need to. However, if you’re accessing “sub-optimally” designed tables for your task, or large raw unprocessed operational data tables, or other such scenarios that consistently form one of the bane of an analyst’s life, then you might find manipulating or summarising data before you use it in Tableau makes life much easier, much faster, or both.

To do this, we’ll use the “Initial SQL” feature of Tableau. This is supported on some, but not all, of the database types Tableau can connect to. You’ll know if your data connection does support it, because an option to use it will appear if you click on the relevant connection at the top left of the data source screen.

If you click that option, you’ll get a text box where you can go crazy with your SQL in order to set up and define whatever final data table you’d like to connect to. Note that you’ll be restricted to the features of your database and the permissions your login gives you – so no standard table creation if you don’t have write-permissions etc. etc. But, to take the example of SQL Server, in my experience most “normal” users can write temporary tables.

Tableau isn’t great at helping you write this initial SQL – so if you’re not super-proficient and intend to write something complicated then you might want to play with it in a friendlier SQL tool first and paste it into Tableau when you know it works, or ask a friendly database-guru to do it for you.

Below then is an example of how one can use variables, CTEs and temporary tables in order to pre-build a data table you can then analyse in Tableau, by virtue of pasting code into the initial SQL box. This code will be re-run and hence refreshed every time you open the workbook. But as the name “initial SQL” suggests, it will not be refreshed every time you create or modify a new chart if you’ve not re-connected to the datasource inbetween.

(For what it’s worth, this uses the default demo database in SQL server – AdventureWorks. It’s the equivalent of Tableau’s famous Superstore dataset, in the Microsoft world 🙂 )

Now, this isn’t supposed to be an SQL tutorial, so I’ll not explain in detail what the above does. But for those of you already familiar with (T)SQL, you’ll note that I set a variable as to how granular I want my dates to be, use a CTE to build a cut-down version of a sales table with fewer columns, and then aggregate my sales table to the level of date I asked for in my variable into a temporary table I called #initialSQLDemo.

In the above, it’s set to summarise sales by year. This means Tableau will only ever receive 1 row per year. You’ll not be able to drill down into more granular dates – but if this is detailed enough for what you want, then this might provide far better performance than if you connected to a table with 1 row per minute and, implicitly or explicitly, ask Tableau to constantly aggregate it in expensive ways.

Later on, perhaps I realise I need daily data. In which case, I can just change the second line above to :

…which will expose data at a daily level to Tableau, and I’m good to go.

SQL / Adventureworks aficionados will probably realise that my precise example is very contrived, but hopefully it’s clear how the initial SQL feature works, and hence in the real world you’ll be able to think of cases that are truly useful. Note though that if your code does something that is slow, then you will experience this slowness whenever you open your workbook.

A quick note on temporary tables:

If you’re following along, you might notice something. Although I created a temp table called #initialSQLDemo (which being temporary, will be deleted from the database as soon as you close your session), it never appears in the Table list on the left of the Tableau data source  screen. 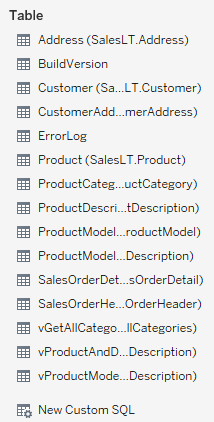 Why so? Well, in SQL Server, temporary tables are created in a database called “tempdb” that Tableau doesn’t seem to show. This is not a fatal deal though, as they’re still accessible via the “New Custom SQL” option shown above.

In my example then, I dragged New Customer SQL to the data pane and entered a simple “give me everything” into the resulting box.

Now, there is a downside in that I understand using custom SQL can reduce performance in some cases, as Tableau is limited in how it can optimise queries. But a well-designed temporary table might in any case be intrinsically faster to use that an over-sized ill-designed permanent table.

When venturing back into Tableau’s main viz-design screen, you’ll see then your temporary table is treated just as any other table source would be. Tableau doesn’t care that it’s temporary.

Although we should note that if you want to use the table in the future in a different Tableau workbook, you’d have to have it run the initial SQL again there, as standard temporary tables are not shareable and do not persist between database sessions.

7 thoughts on “Actually you can use variables, CTEs and other fancy SQL with Tableau after all”